For the ones who like Italian-American dishes, especially pasta, it is common knowledge that one of the more popular ingredients is the vodka sauce. Usually, it is made out of traditional Italian herbs, tomato sauce and several other ingredients which give it its distinct flavor. Many brands offer this type of product, but not all are of good quality, making it hard to find the right one for you. To make your search easier, we compared brands, product quality and user ratings to present you with a review of the 10 best vodka sauce brands currently on the market. 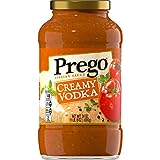 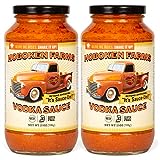 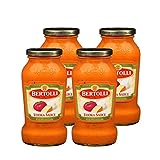 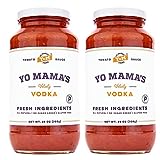 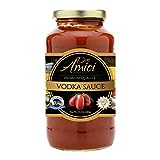 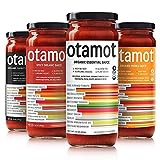 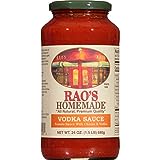 If you are looking for a more creamy consistency when buying vodka sauce, then this might be the right product for you. It is a blend of ricotta cheese, cream, garlic and sweet tomato sauce. It is said to be without any gluten and also contains a lot of nutrients since it is packed with vegetables. The whole jar weighs 24 ounces and lasts you for at least a big family dinner.

Since it has a great creamy texture, high-quality ingredients and a lot of popularity on the market, it is more than fit to be called one of the best jarred vodka sauces ever.

If you are looking for one of the best vegan vodka sauce brands currently on the market, then this might be the perfect pick for you. It features 2 jars of plant-based sauce that delivers a silky smooth flavor. To maintain its unique texture, the brand decided to replace all dairy products with unsweetened coconut milk. Its special mix of seasoning also added to its overall popularity.

In terms of quality and high ratings, this product offers all of that, making it fit to be called one of the best vodka sauce brands.

Another favorite among people takes a place on our list of the best vodka sauce brands. This time featuring a spicy version of this seasoning. It is promised to contain only all-natural ingredients and that it has no added sugar. It gets its unique flavor from the added garlic, onions, herbs, olive oil, plum tomatoes, red pepper and many others.

Because of its high rating on Amazon and overall popularity, we decided it deserves the title of one of the best jarred vodka sauce brands currently available.

The great combination of savory cheese and sweet cream makes this a popular pick among many people. It doesn’t contain any sugar and gluten. It is also said to be Kosher dairy. The whole package contains 2 jars, with each weighing 25 ounces, which will last you for several meals.

Because of its high rating on Amazon and great customer feedback, we decided it would make a great addition to our review of the best vodka sauce brands.

In terms of brand recognition, high-quality ingredients and popularity, this is counted among one of the best vodka sauce brands currently available on the market. It has been a popular pick for a long time now among many people. Its flavor is described as unique and delicious, whilst providing your dishes with a great texture when added to them.

Because of so many positive features and an excellent rating on Amazon, it makes for a perfect addition to our review of the best vodka sauce brands.

If you are looking for a seasoning to go with your Keto diet, then this would be a great choice. It features high-quality ingredients like non-GMO tomatoes, onions and parmesan cheese. It delivers a great flavor to your dishes, which has been claimed a lot by its fans all over the world.

Because of its high-quality ingredients and a lot of positive user feedback, it is viable to be called one of the best jarred vodka sauces currently on the market.

The next product has gained a lot of positive feedback from its customers in the past years. It features 24 ounces of high-quality spaghetti vodka sauce that has been one of the more popular products of its type on Amazon. Its special ingredients are San Marzano tomatoes that come from Italy and deliver a distinctive taste to the sauce. The brand also promotes the idea of using only fresh ingredients in its products.

All in all, it has gained a lot of great ratings on Amazon and huge popularity all around the world, making it fit to be called one of the best jarred vodka sauces to buy.

If you are looking for a good vodka sauce that is also dairy-free, organic, gluten-free and vegan-friendly, then this would be a great pick for you. The jar weighs 64 ounces and provides you with a great and high-quality product that also provides a great flavor to anything you add it to.

In terms of organic and all-natural ingredients, this product counts among one of the top picks currently on the market. With so many great features and huge popularity among many people, it is fair to call it one of the best jarred vodka sauce brands currently available for purchase.

If you are looking for a healthy vodka sauce option, then one of the most popular picks would be the next product. It features 3 jars, with each weighing 24 ounces. It contains only all-natural and high-quality ingredients to ensure it offers a great taste and no unwanted ingredients. Its recipe has been used for generations and offers true homemade flavors. Its Italian tomatoes, cheese and vodka combination has made it into one of the most picked products currently on Amazon.

Because of its high popularity and quality of ingredients, it is more than viable to be called one of the best premade vodka sauces currently available on Amazon.

Another product from the brand Rao’s takes a place on our list of the best vodka sauce brands, which just additionally shows how much effort the brand puts in providing its customers with a high-quality product. This time featuring a jar that weighs 24 ounces and uses only the best ingredients possible to satisfy its customers.

Because of the brand’s great reputation and high demand for its products, we decided it would make a great addition to our list of the best vodka sauce brands currently available on the market.

Below you can find the most searched questions about vodka sauce on the internet. We try our best to answer them in as much detail as possible. Hopefully, you will learn something new and it will be easier for you to decide whether you want to buy vodka sauce.

What Is Vodka Sauce Made Of And What Does It Taste Like?

Vodka sauce is made from tomato sauce, vodka, Italian herbs and heavy cream. It’s a sauce used in Italian-American cuisine and one of the most popular sauces in America overall. You shouldn’t taste any alcohol flavor because the alcohol evaporates while cooking, it only leaves a small taste of tanginess behind, which combines well with tomatoes and peppers. The texture is rich and thick because the sauce is slowly simmered to the desired consistency.

How To Make Homemade Vodka Sauce?

1. Take a large pot and add water. Put on high heat and wait till it starts to boil. Add the pasta and salt.
2. Cook pasta until al dente.
3. Take a strain and strain the pasta through it. Keep half a cup of the pasta water and set it aside.
4. Take a large skillet and once it’s hot add the oil. Add garlic and shallots, and cook for 3 minutes.
5. Add tomato paste and mix well. Stir for 3 minutes.
6. Add the vodka and stir until the vodka evaporates.
7. Add half a cup of water that you set aside: stir. Add pepper and salt to your taste.
8. Add cream and mix well. Reduce heat to low and let it simmer for 4 minutes. Add the parmesan and butter and let it simmer for 3 minutes more.
9. Take the al dente pasta and stir it into the sauce. Mix well so the pasta gets fully coated.
10. Add an optional amount of salt and pepper.

1. Take a large pot and add water: bring it to a boil over high heat. Add the pasta and cook it till al dente. Strain and set aside.
2. Take a large pan and melt the butter over medium heat. Add the red pepper and garlic and cook for 1 minute.
3. With the help of a food processor, puree the tomatoes. Once done, add it to the pan with the melted butter.
4. Add the vodka and simmer for 10 minutes over low heat, so that the vodka evaporates.
5. Add heavy cream and parmesan cheese slowly and stir until the sauce thickens. To your taste, add the desired amount of pepper and salt.
6. Remove from heat and pour directly on the pasta you’ve set aside. Toss so the pasta gets an even coating. If you like, you can now sprinkle parsley, remaining parmesan cheese and red pepper flakes on top and serve.

What Meat Goes With Vodka Sauce?

Why Is It Called Vodka Sauce?

There are many stories about where vodka sauces originate from. Some claim that it was first invented in America, while most agree the earliest vodka sauce comes from Italy.

America:
In America, some say that chef Luigi Franzese from New York first invented penne alla vodka in his Orsini restaurant in the late 1970s. It’s also believed that the sauce was invented by James Doty in 1980.

Italy:
2 stories are going around on who made vodka sauce first. In the Ultimate Pasta cookbook, author Paquale Bruno Jr. claims that vodka sauce was first made at a restaurant called Dante. Another cookbook called Williams-Sonoma Essentials of Italian claims that a Roman chef who worked in vodka production combined the ingredients first. In the book food for friends by Barbara Kafka, you can also see her mentioning that vodka sauce was for sure first produced in Italy.

How Much Vodka Is In Vodka Sauce?

To make 8 ounces of pasta with vodka sauce you’ll need only 3 tablespoons of vodka. Once cooked, the vodka will evaporate and leave a tangy taste behind.

How to Thicken Vodka Sauce?

Vodka sauce is in general thick if you cook it correctly. However, if you prefer an even thicker sauce or the sauce is thin, there are some ways to thicken it up:

1. Let it simmer for longer. More liquids will evaporate which will produce a thicker sauce.
2. Add more cream, let simmer till you get the desired consistency.
3. After you remove the sauce from heat, grate in parmesan cheese and stir.
4. Make a slurry paste with cornstarch and water and add it to the sauce while whisking constantly.

Can You Eat Vodka Sauce When Pregnant?

Studies suggest that you should avoid eating vodka sauce while pregnant. While vodka sauce contains low amounts of alcohol, a whole plate of vodka sauce pasta can still have enough vodka in it to be bad for you.

Fruity Italian red wines usually go well with vodka sauce like the Sangiovese or perhaps you prefer a wine with a more acidic and citrusy flavor like the Sauvignon Blanc.

How To Make Vodka Sauce By Chef Mark

Chef Mark from LearnToCook explains how to make vodka sauce, which kind of vodka should be used and why. Don’t hesitate and try to make your own. You will be surprised by how tasty homemade vodka can be.

We hope our review of the best vodka sauce brands was helpful in your search. If you want to learn more about the topic, you are more than welcome to browse our webpage for more information.

Best Seasoning To Put On Pasta 2021