Table of Contents show
Guaraná Antarctica
Why do people like this product so much?
What is guarana?
Where can you buy guarana soda?

Craving for a refreshing non-alcoholic drink to relax from your everyday troubles? Have you tried most of the known soda brands and want to try something new?

No problem, because we have something for you that isn’t well-known, but still has huge popularity among its users! Presenting to you guarana soda, brought to you by the brand Guarana Antarctica. 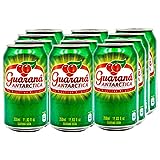 Not only does it provide a new experience in terms of soft drinks and taste, but also offers a special combination of a superfood and energy booster. Made from the Guarana plant, which can be found in South America, this soda promises great taste and energy-boosting as you have never seen before.

It is 100% natural flavor, thus allowing you to taste one of Brazil’s favorite soft drinks in its original state. It is also 100% sweetened with sugar cane and not corn syrup, which additionally proves its high quality and general popularity in Brazil and all around the world.

People often describe it to be similar to ginger ale, but with a more exotic taste. It has a variety of different uses, not only as a soft drink to drink from the can.

Because of its texture and unique flavor, it is perfect to combine with other ingredients like adding a splash of orange to it or using it as a mixer for cocktails.

Guarana soda is perfect as a refreshment drink and a quick energy booster. Since it is made out of guarana extract, it gains its energy-boosting properties. Also, this South-American plant has a unique taste, giving it the edge over other ingredients used in sodas.

People also mention a lot that it is hard to find this product in normal stores and most of the time can only be ordered over the internet. This doesn’t prove a problem for anyone, since even if you order the pack of 12 guarana sodas, the price comes very near to normal soda bought in a convenience store.

A lot of people also buy it as a specialty to give their visitors. As already mentioned, it is also a very popular mixer for cocktails. If you want to try out a few recipes, where you could experiment with substituting ginger ale with guarana soda, click here.

It is a climbing plant found in the Amazon and most known in Brazil. It has large leaves and clusters of flowers. The seeds from its fruit, which are about the size of a coffee bean are pitch black. By ripping the fruit open, the fruit in combination with the seed resembles an eyeball, which has brought many myths among the people living in those areas for many years.

Since guarana has about twice the amount of caffeine as coffee beans, it is generally used as a superfood around the world, offering a great boost of energy. Using it for making guarana soda is just another ingenuity of people to bring you the finished product directly to you in a container that is ready to be used whenever you want.

Where can you buy guarana soda?

Because of its quality ingredients and the fact that it is made from a unique plant found in the Amazon forest, people often buy it as a non-commercial soft drink for themselves, their friends or guests. It has an affordable price and has many different uses. Drinking it directly from the can, used as a mixer for cocktails, adding splashes of citruses to it and many more.

These facts and many more gave this guarana soda great ratings on Amazon and increased its popularity all around the world tremendously. It counts as one of the bestsellers on the market right now and is an absolute must-have if you want to try something refreshing, exotic and tasty at the same time!

If you want to check out more reviews yourself click here and scroll down until you get to the review section of the product.